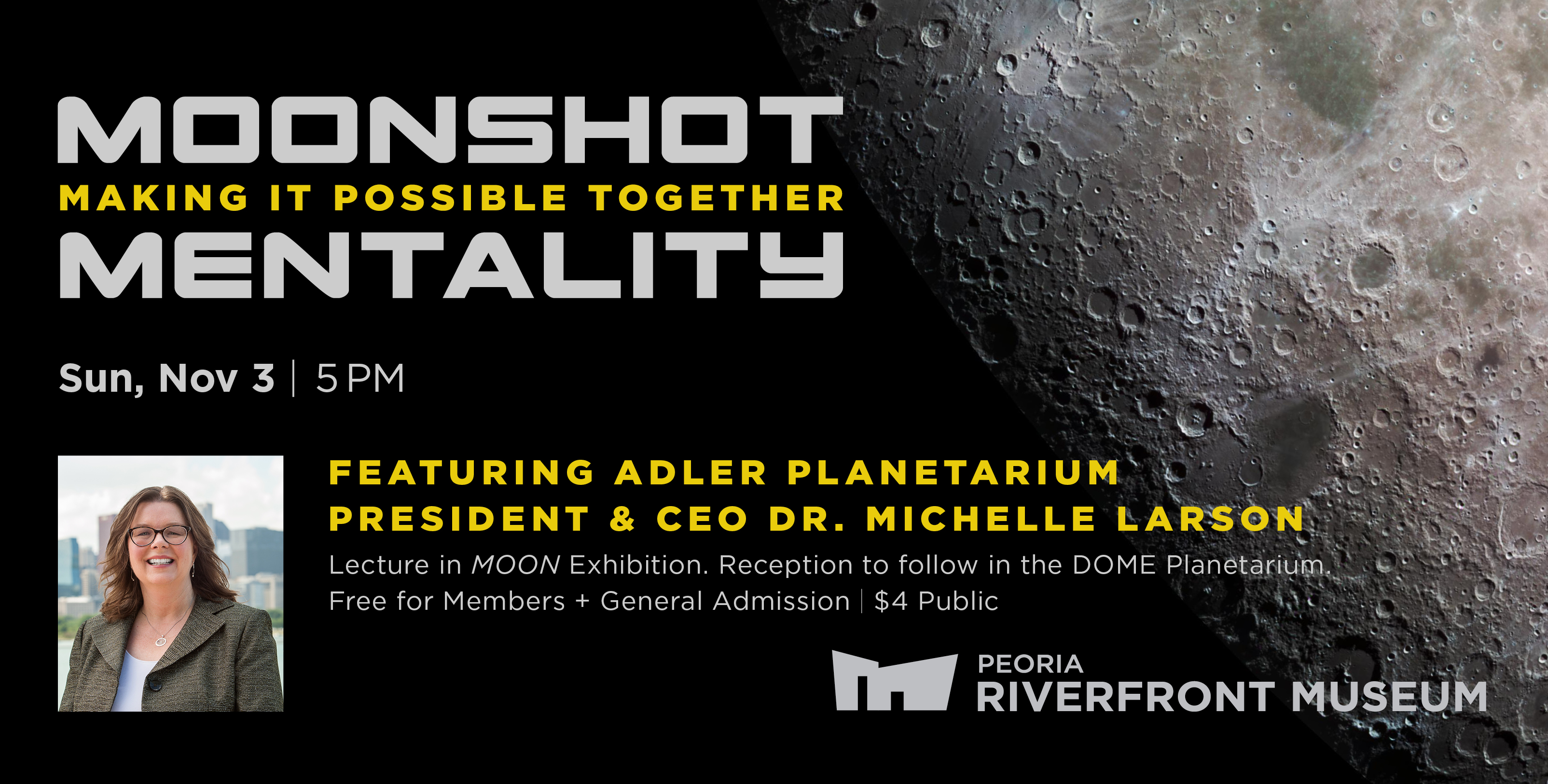 Join us in welcoming Dr. Michelle Larson, President and CEO of The Adler Planetarium, to Peoria for a special presentation in the MOON exhibition with a reception to follow in the Planetarium.

The 50 year anniversary of walking on the moon has given us great cause to celebrate how moonshots are made possible through teamwork. In this talk, we will meet some of the people who brought America's first planetarium to Chicago, who launched this nation to the moon, and who continue to inspire us all to make it possible - together.

Michelle B. Larson, PhD | President and CEO - Adler Planetarium
Michelle Larson attributes her career path to looking up, literally. Growing up in Alaska she enjoyed the beauty of the Northern Lights, and she became further captivated by astronomy in her 20s when she pointed a pair of binoculars at the Moon. The stunning details visible on its craggy surface were a complete surprise, and the experience left her eager to explore what other secrets the cosmos had to offer. Now, as the President and Chief Executive Officer of the Adler Planetarium in Chicago, Michelle leads a talented team that connects people to the Universe and each other under the sky we all share. Since Michelle joined the Adler Planetarium in 2013, that team has found new and innovative ways to meet people wherever they are and welcome them into the scientific community. The museum has expanded programming and partnerships in neighborhoods across Chicago; developed a live lecture series that projects stunning data visualizations onto planetarium domes around the world; and remained home to Earth’s largest platform for citizen science—an online tool that connects researchers with millions of volunteers around the globe. During this time, annual attendance at the museum has increased by 35 percent. Michelle earned her PhD in physics from Montana State University, and serves on several national and Chicago-area advisory boards. She lives just outside Chicago with her husband—who is also an astrophysicist—their daughter, and three cats.

The Adler Planetarium
The Adler Planetarium connects people to the Universe and each other. Whether it is introducing a guest to the Ring Nebula, a neighborhood school to a community partner, a research team to an army of citizen scientists, or one staff member to another, the Adler’s focus on meaningful connections dates back nearly a century. Today, the museum hosts more than half a million visitors each year and reaches millions more through youth STEM programs, neighborhood skywatching events, online citizen science, and other outreach projects. With the Adler’s support, people of all ages, backgrounds, and abilities gain the confidence to explore their Universe together and return to their communities ready to think critically and creatively about any challenge that comes their way.