State of the Museum 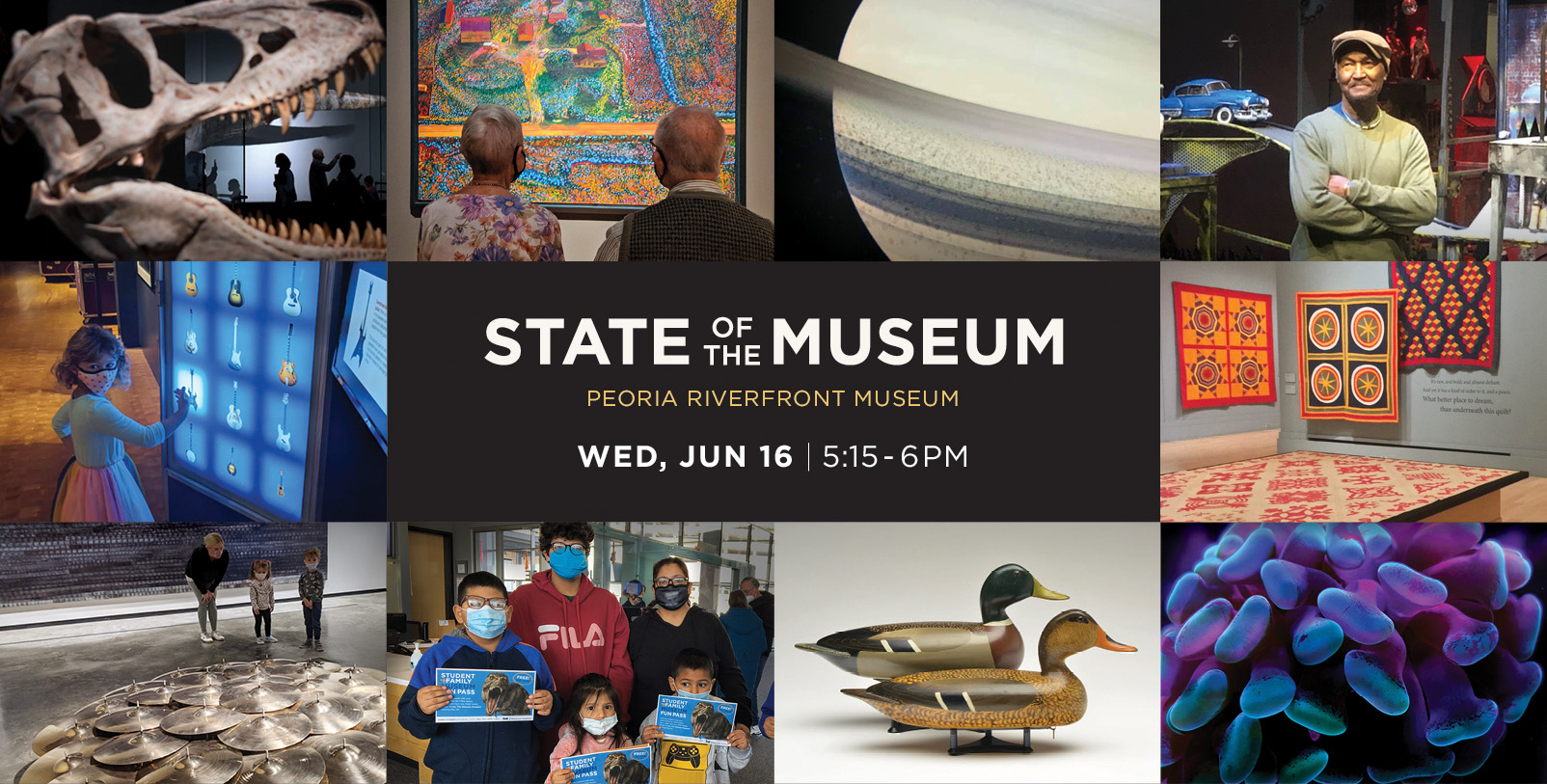 "State of the Museum" presentation led by Board Chair Steve Jackson and President & CEO John Morris. 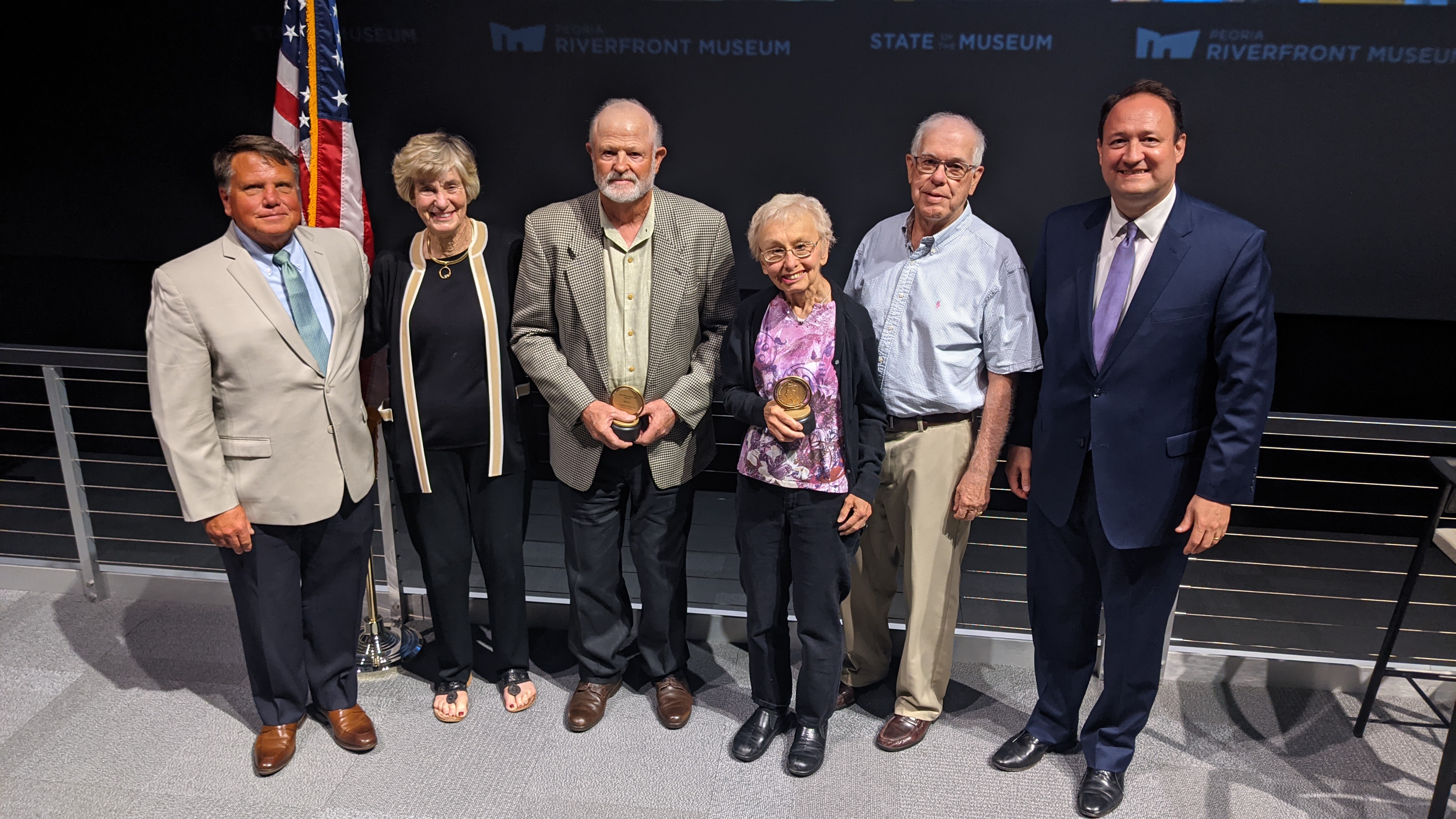 Peoria Riverfront Museum presented its James Smithson Leadership Award at the State of the Museum event to Randy Root (2020 winner) and Barb & Bernie Drake (2021 winners). The Smithson award is presented to those individuals who have made outstanding contributions to the museum over a long period of time. Randy Root serves as chief advisor for the Center for American Decoys, which he helped to establish. Barb & Bernie Drake are both long-time supporters of the museum. Bernie is a founding board member. Barb is a former Journal Star editorials editor who wrote or oversaw 147 columns or editorials encouraging the building of the museum over 30 years! Randy Root and Barb & Drake join past Smithson award recipients Sally Snyder, founding board member, and Sid Ruckriegel, past board chair. Congratulations Randy, Bernie and Barb for all you have done and continue to do for our museum community!

Peoria Riverfront Museum Ends Unprecedented Year in the Black with Strongest Finish Ever, Board Announces at Annual “State of the Museum” Event

PEORIA, Ill. – Despite pandemic challenges, Peoria Riverfront Museum will end an unprecedented fiscal year in the black June 30 with its strongest finish since opening in 2012. The museum’s board of directors made the upbeat announcement at the annual State of the Museum event held June 16 at the museum’s Giant Screen Theater.

Ninety-four percent of the museum’s total revenue came through fundraising and grants during the museum’s fiscal year that began July 1, 2020, as opposed to 75% during a typical year, according to Anne Marie Miller, the museum’s vice president of development.

“We celebrate an outstanding year, recognizing the generosity and commitment of our Visionary Society members,” said Steve Jackson, museum board chair. “This museum has become a centerpiece for our community and a source of pride for all of us.”

“The state of the museum is strong,” said John Morris, museum president and CEO. “At a time when we needed it most, our donors, board, volunteers and staff are more devoted than ever before to a mission of inspiring others and being inspired by others.”

It ends with the international debut of the first-ever exhibition featuring feathered tyrannosaurs, “T. rex: The Ultimate Predator,” presented by CEFCU, and created by the American Museum of Natural History, New York City.

During the year, the museum completely renovated all five of its exhibition spaces which included, along with “T. rex,” the installation of Preston Jackson’s “Bronzeville to Harlem: An American Story,” the museum-curated exhibitions “101 Treasures of the Peoria Riverfront Museum Collection,” “Masterworks of the Illinois River: The Collection of Thomas K. Figge,” “Folk” and “Community: African American Freedom, Perseverance & Leadership During Migration,” as well as an exhibition featuring work borrowed from Crystal Bridges Museum of American Art and funded by ArtBridges, “American Verses: Terry Adkins, Mark Bradford & Kerry James Marshall.”

The Dome Planetarium was transformed with a much-needed upgrade, receiving a grant and funding to obtain the “world’s most advanced planetarium system,” a 6.5K Digistar 7 system, connected to real-time data and content from science organizations, universities and planetariums worldwide.

“More than ever, our donors and members stepped up and kept us going through the pandemic so that, even while our building was closed, we never stopped delivering great museum content and providing inspiration for our community,” said Miller.

During its annual meeting, the board approved a new slate of officers and welcomed new members. Jackson stays on as board chair and Todd Baker as vice chair. Karen Jensen becomes treasurer and Brian Ray, secretary.

Joining the board are Derrick Booth, Peoria Public Schools director of social and emotional learning, and Gretchen Petrakis, community volunteer. Leaving the board after six years of service is Colleen DiGiallonardo, who also chaired the Collections Committee.

At the end of the State of the Museum event, the museum presented its James Smithson Leadership Award. Randy Root, 2020 winner, serves as chief advisor for and helped to create the Center for American Decoys. Barb and Bernie Drake are the 2021 winners. Both long-time supporters, Bernie Drake is a founding board member and Barb Darke, a former Journal Star editorials editor who wrote or oversaw 147 columns or editorials encouraging the building of the museum over 30 years.

“The Smithson award is presented to those individuals who have made outstanding contributions to the museum over a long period of time,” said Morris. “Randy Root and Bernie and Barb Drake join past Smithson award recipients Sally Snyder and Sid Ruckriegel. Congratulations Randy, Bernie and Barb for all you have done and continue to do for our museum community.”

For more information about the exhibitions, upcoming programs or membership, or to purchase exhibition or movie tickets or a membership, call 309.686.7000 or visit RiverfrontMuseum.org.

Peoria Riverfront Museum
The only multidisciplinary museum of its kind in the nation, the Peoria Riverfront Museum uses art, science, history and achievement to inspire confidence, lifelong learning, and talent. Since opening in 2012, the privately funded museum has provided more than one million experiences through major exhibitions, a permanent collection, interactive galleries, a dome planetarium, giant screen theater and educational programming including curricula-related student visits. The AAM-accredited, Smithsonian-affiliated private nonprofit museum is supported by more than 4,000 members and donors, and is housed in a county-owned LEED Gold-certified building on a campus overlooking the Illinois River.