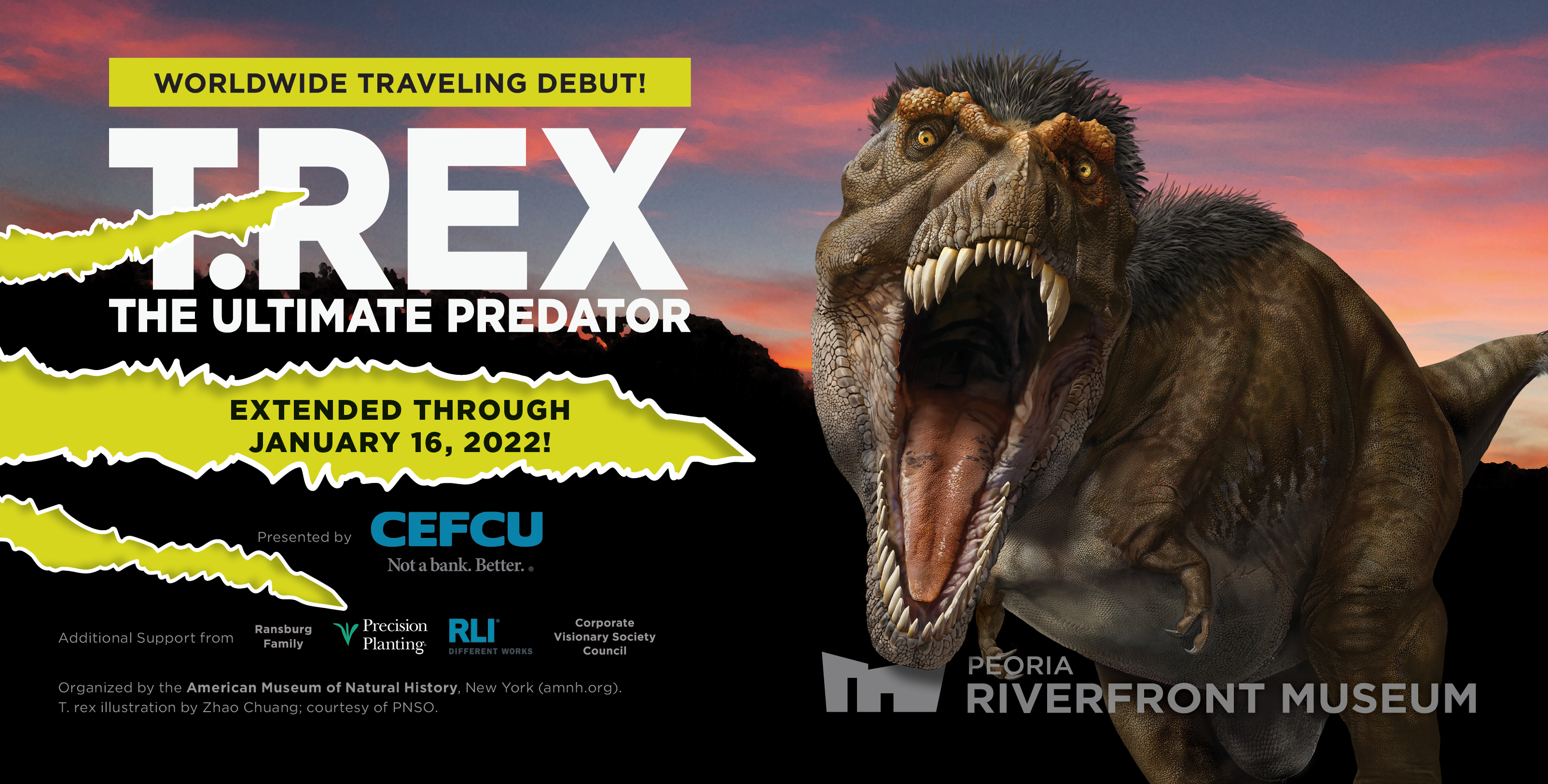 A jaw-dropping new exhibition about the world's most iconic dinosaur!

"T. rex: The Ultimate Predator" introduces you to the entire tyrannosaur superfamily and reveals the amazing story of the most iconic dinosaur in the world through stunning life-sized models, fossil casts, interactives and an immersive shadow theater re-creating an epic battle.

This exhibition, based on the latest T. rex research, is on the road for first time directly from the founder and leading researcher of T. rex, the American Museum of Natural History (AMNH), NYC.

WARNING: you may never think of T. rex the same way again!

What You'll See in "T. rex: The Ultimate Predator"

Even T. rex was once a vulnerable hatchling and many never made it past age one.

How did a fluffy little critter turn into a massive killing machine? Every terrifying T. rex was once a helpless hatchling. And all tyrannosaurs evolved from smaller ancestors - some little bigger than this one as adults. The full tyrannosaur story spans 100 million years of evolution and includes dozens of species discovered around the world - including T. rex, uncovered in Montana in 1905 by American Museum of Natural History fossil hunter Barnum Brown.

Like many early tyrannosaurs, Dilong had arms that were relatively long - and capable of seizing small prey.

Tyrannosaurus rex may be the most famous tyrannosaur, but it’s not the most typical. Most tyrannosaurs were not giants like T. rex. Early species were small and fast. Discover what scientists know about the tyrannosaur family, including Dilong paradoxus, which was the first tyrannosaur found with fossilized feathers.

Many scientists argue that Nanotyrannus is an invalid name and that these supposed "dwarf tyrannosaurs" are just juveniles of T. rex.

How did T. rex get so big when its ancestors were so small? Find out how paleontologists learn about how fast an extinct animal grew and why scientists disagree about whether some tyrannosaur specimens are small adults from a different branch of the family tree or young T. rex.

All tyrannosaurs were built to kill, but the biggest and baddest of them all was Tyrannosaurus rex. With its huge size, sharp claws and teeth that could bite through bone, it dominated the competition. Discover how paleontologists read fossils for hidden clues about how this mega-predator lived, how several tyrannosaurs shared an ecosystem, and why scientists think that T. rex ate members of its own species.

New research on this powerful hunter’s senses show that its keen vision, smell, and hearing made it very hard for prey to avoid detection. Explore how scientists use brain casts and observed behaviors of living T. rex relatives—birds and alligators—to learn more about how T. rex navigated its environment.

THANK YOU TO OUR SPONSORS!

The American Museum of Natural History, founded in 1869, is one of the world’s preeminent scientific, educational, and cultural institutions. The Museum encompasses more than 40 permanent exhibition halls, including those in the Rose Center for Earth and Space and the Hayden Planetarium, as well as galleries for temporary exhibitions. The Museum’s scientists draw on a world-class permanent collection of more than 34 million specimens and artifacts, some of which are billions of years old, and on one of the largest natural history libraries in the world. Through its Richard Gilder Graduate School, the Museum grants the Ph.D. degree in Comparative Biology and the Master of Arts in Teaching (MAT) degree, the only such freestanding, degree-granting program at any museum in the United States. The Museum’s website, digital videos, and apps for mobile devices bring its collections, exhibitions, and educational programs to millions around the world. Visit amnh.org for more information.