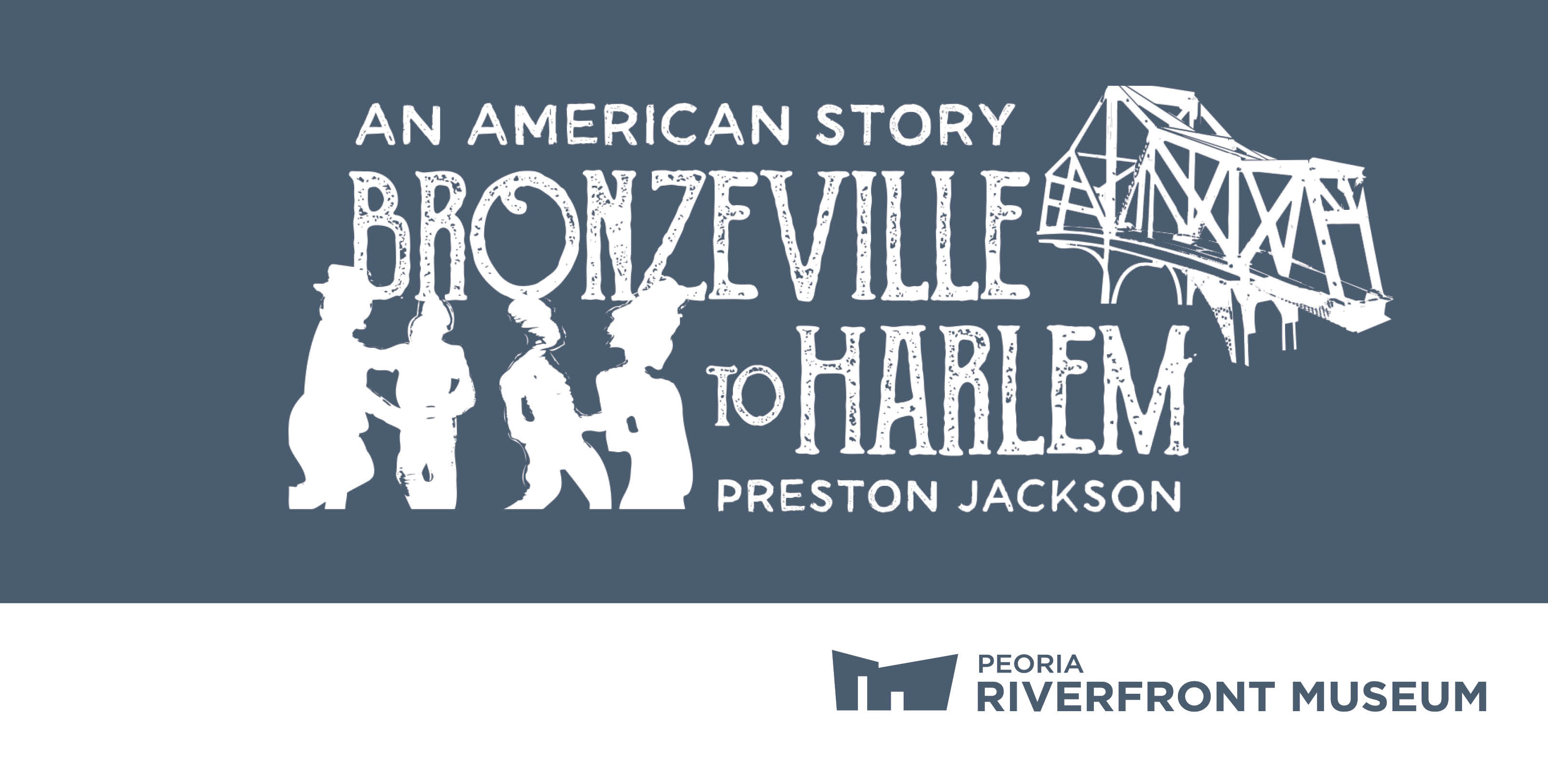 "Bronzeville to Harlem: An American Story" showcases the stories of American migration and immigration, hope and opportunity, freedom and the struggle for equality.

Twenty-five years in the making, “Bronzeville to Harlem: An American Story,” created by artist Preston Jackson, is a sculptural installation comprised of hundreds of unique small bronze and steel figures, relief sculptures, automobiles, buildings, streets and a truss bridge. Originally entitled “From Bronzeville to Harlem,” the cityscape is a simultaneously playful and serious contemplation of the individual stories that made up the urban centers from places such as Peoria, Chicago's Bronzeville and the Harlem neighborhoods of Manhattan.

Completed in 2020, in conjunction with the centennial of the start of the Harlem Renaissance, Jackson more than doubled the size of the original installation and retitled the piece, “Bronzeville to Harlem: An American Story.”

The period known in history as the Harlem Renaissance represented a cultural and artistic movement spanning the 1920s in the urban communities in the Northeast and Midwest during the great migration. "Bronzeville to Harlem: An American Story" showcases the stories of American migration and immigration, hope and opportunity, freedom and the struggle for equality.

Installed as the climatic centerpiece of the Peoria Riverfront Museum Gallery known as The Street. The sculpture provides an artistic experience unique among any in the nation, an immersion for visitors into the Harlem Renaissance, set to period jazz music and brought to life with expert lighting and an audio narration by actors and the artist himself.

Join Preston Jackson's "Bronzeville to Harlem" Partners! CLICK HERE. This is an affinity group for members with a special interest in building the strength of community found in the diversity of the American story. This group has a special emphasis on celebrating achievements from Black culture and many other ethnic communities flowing from the renowned artist Preston Jackson’s inspiring lifetime masterwork, “Bronzeville to Harlem: An American Story.”

Artist Preston Jackson has offered the piece as a permanent loan for display at the Peoria Riverfront Museum.

It takes people from many places on this Earth to speak of who we are as a society. This is what this piece is about. We are a one-world American society and all must be acknowledged as contributors.
— Preston Jackson

Preston Jackson's amazing sculpture is a must-see experience. The optimism and promise of American opportunity reflected in the Harlem Renaissance is perfectly relevant to the life of our community today.
— John D. Morris, President & CEO, Peoria Riverfront Museum

The visual history depicted in this piece and its content are like a guiding light to the present and on into the future. Diversity is the key.

Everything we utilize and touch is influenced by a variety of cultures. Every human being, no matter their status, has contributed to what exists here in America.

Early settlers were of many cultures, both immigrants and native Americans plus those taken by force. They gathered and lived in groups, developing pride in their neighborhoods and reflecting the culture they knew. Their ways of living and raising their families affected those around them, including the owners of the businesses that hired them. These communities still exist today. There is visible evidence that these segregated and blending cultures have created who we are today as people. My work reflects anthropological digs from the African American graveyards to the European architectural craftsmanship seen in cities.

It takes people from many places on this Earth to speak of who we are as a society. This is what this piece is about. The music, the transportation, the buildings, the inventions are made by people in various segments of society. There are signs and clues that we are a one-world American society and all must be acknowledged as contributors. Despite the clashes between differences in wealth, religion, and gender, evidence of human interaction - the blending, prevails.

Preston Jackson, BFA, Southern Illinois University, MFA, University of Illinois, is unique in the art world. The Decatur, Illinois native was a long-time faculty member at the School of the Art Institute of Chicago, where he was head of the figural department, and served on the faculty of Western Illinois University. Jackson, who founded the Contemporary Art Center of Peoria, has been a Peoria resident for nearly four decades. The husband and father is a historian, sculptor, painter, jazz guitarist, professor, teacher, mentor, car collector, martial arts master, and a member of Alpha Phi Alpha. His is a pioneering voice of patriotism and protest, and race and culture. Jackson's works of the African American experience are inspired by subjects ranging from military veterans to women of change to jazz musicians, to comedian Richard Pryor and Chicago’s founder Jean Baptiste Point du DuSable, to race riots in Springfield and Native American mounds in Cahokia. In 1998, Jackson was named a Laureate of the Lincoln Academy, a recognition that he is one of Illinois’ most significant leaders in history. He continues his extraordinary creative productivity to the current day.

The Peoria Riverfront Museum invites you to participate in a once-in-a-lifetime opportunity to join with artist Preston Jackson and the museum in support of this artistic masterpiece. The goal is to help lift up our community in a renaissance of optimism, culture and confidence that celebrates our own American stories and our place in the shaping of history.

CLICK HERE  to contribute online to “Bronzeville to Harlem: An American Story,” or please contact our Vice President of Development, Anne Marie Miller at ammiller@peoriariverfrontmuseum.org or by calling 309.863.3026.

"Bronzeville to Harlem: An American Story" by Preston Jackson is made possible by grants from Givsco Construction Company, James & Lou Baldwin, Visionary Society and the generosity of the artist. Additional support comes from the Illinois Arts Council Agency and the Friends of B to H.