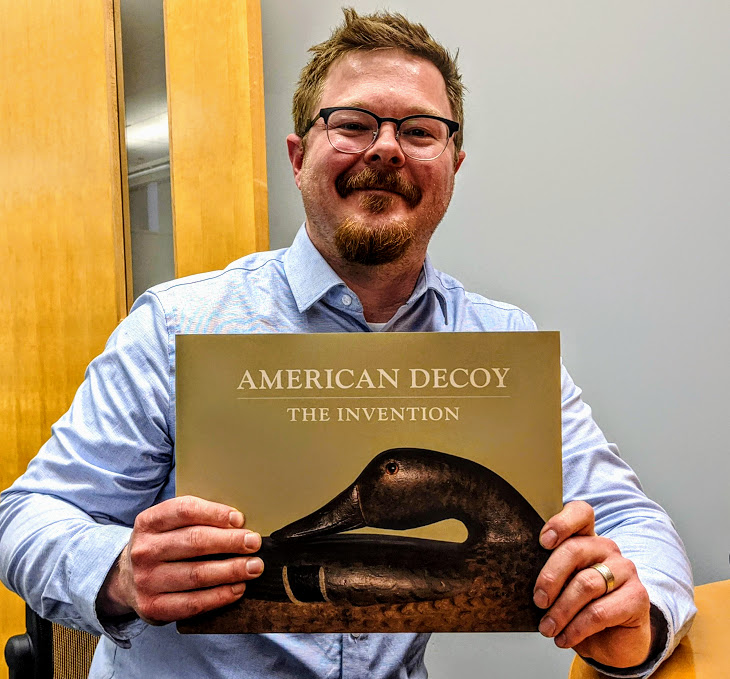 Own the landmark book on the greatest collection of decoys ever assembled!

Purchase "American Decoy: The Invention" in the Museum Store or online today!

See the decoy exhibition deemed by national collectors and scholars as the greatest show of decoys ever assembled, through the "American Decoy: The Invention" exhibition book. This extraordinary hardcover edition published by Peoria Riverfront Museum celebrates the first-ever museum exhibition of its kind with more than 200 pages of full-color, high-resolution images of the hundreds of world-class American waterfowl decoys in the exhibition and more that were assembled from the country’s most respected collectors and institutions. The photographs are accompanied by descriptive text and insightful information into the lives of the pioneering carving legends whose work was shown, including Charles Schoenheider Sr., Elmer Crowell, Charles Perdew, the Caines Brothers, Lee Dudley, Charles “Shang” Wheeler and many others. 208 pages, 11 x 9-in.

Thank you to the Taylor French Decoy Fund for sponsoring the production of this catalogue.

The wooden bird decoy is an American innovation and one of the foremost expressions of American folk art. American Decoy: The Invention is a testament to America’s rich waterfowl decoy carving history and celebrates the legendary carvers that gave it shape.
- Zac Zetterberg (pictured), Curator, The Center for American Decoys