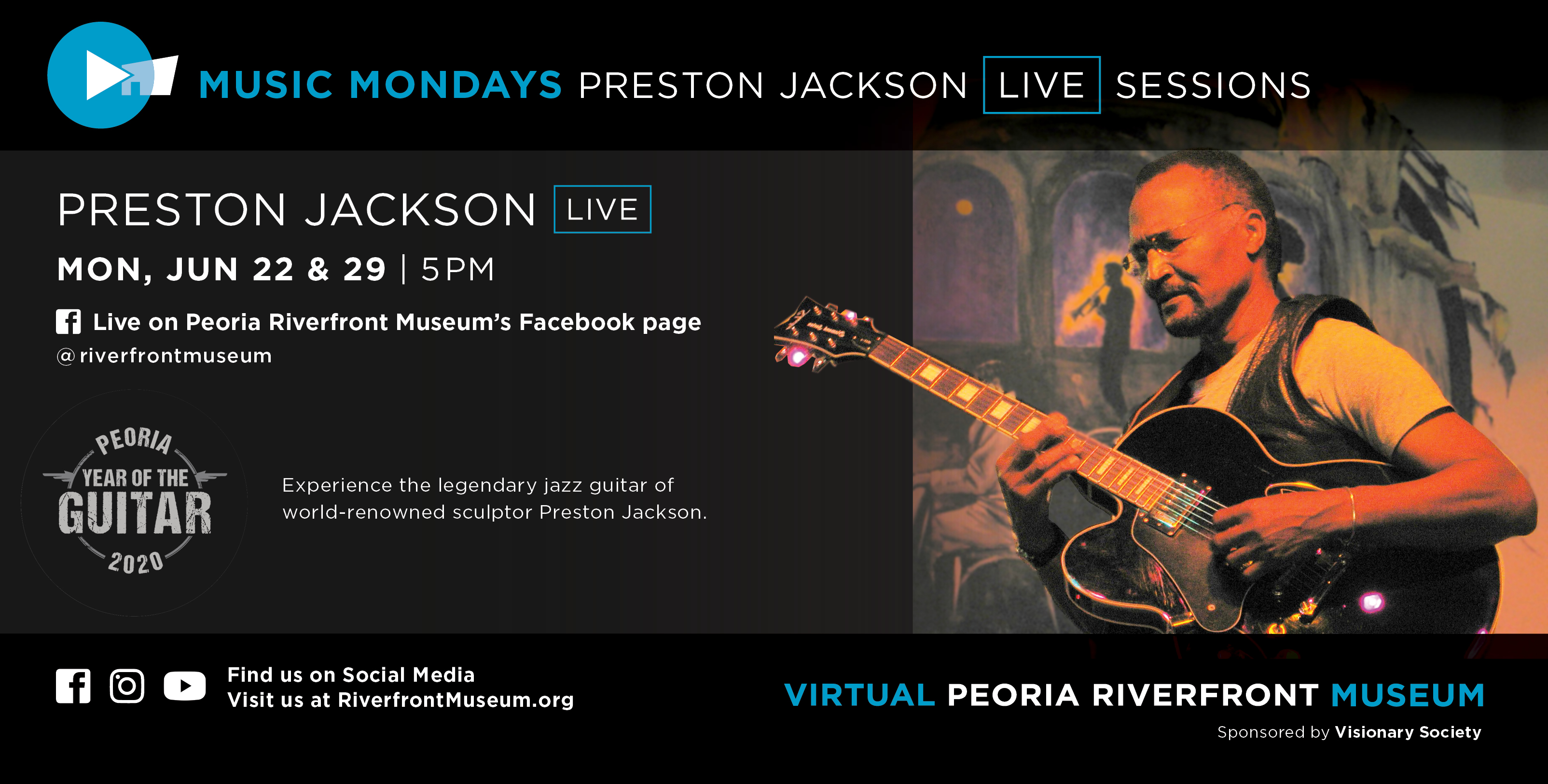 Join us as we host world renowned sculptor and legendary jazz guitarist Preston Jackson. The Central Illinois native, who works from his studio in Peoria, is a member of the Peoria Riverfront Museum President’s Advisory Council. His seminal work, “Bronzeville to Harlem: An American Story” will be installed in the museum’s The Street gallery this summer.

I was fascinated by music as a young child, and I thought I would be a trumpet player because I was chosen as a bugler in the Boy Scouts. I couldn’t wait for dawn to play my bugle, so I played most of the night, keeping the entire neighborhood awake. Not long after, my next door neighbor James Echols purchased a Sears Roebuck guitar, who soon grew tired of trying to play it and gave it to me. The whole neighborhood was relieved that I was no longer playing the bugle.

At age 14 I had a collection of raggedy old guitars, they never had a full set of strings, but I was enamored with the concept that I could get music out of such crude instruments. Benny Goodman’s “Little Brown Jug” and Fats Domino’s “Blueberry Hill” were the first tunes I played. Larry Rimes taught me a few chord changes using straight tuning. Then I taught myself Doo-wop, 12-bar blues and various church tunes. My guitars took on human personalities.

I formed a band when I was 17, playing for school talent shows, we had some interesting instruments. My bass player had a violin-shaped Gibson bass and my guitars were Gibsons, Epiphones and Fenders when we started making a little money. Before that it was Stellas, Kays and Silvertones.

My first professional performance was when my sister hired my very young band to play for a YWCA dance. I was so drawn to the attention that I knew I wanted to be a musician as well as an artist. Art came easy for me. Music took more discipline.

Later my band called the Rhythm Aces traveled the Midwest Chitlin’ Circuit making music and becoming very popular playing rock ‘n’ roll and rhythm and blues. We were fortunate enough to record on the Sun Records label in Nashville and VeeJay Records in Chicago. We were in the company of such artists as a very young Elvis Presley, Ike and Tina Turner and Dionne Warwick. These were not big stars at the time, so we didn’t think much about them--we were just having a great time making music. There are still 50 year old recordings out there.

And playing music paid my way through college. I played with Big Twist and the Mellow Fellows. I learned the blues from Koko Taylor’s guitarist, Maestro. When I went back to college, my music took a different direction, becoming more jazz-based. I was directed by people like Tony Zamora’s jazz ensemble which allowed me to play with many noted musicians.

I played with a variety of bands--jazz-rock with Al Ferguson and Black and White, and collegetown jazz with Tom Becker. At various times I also played with Greg Ward, Brianna Thomas, Reggie and Mardra Thomas and Steve King. I also played many years with Jimmy Binkley at the Fulton Street Steakhouse in downtown Peoria.

I helped form Audrey Blue and then Kriss Kross with Gary Adkisson in Peoria. For the last twenty years we shaped a fluid group around well-known vocalist Judy Page, known as Preston Jackson and Friends. My last group is Vintage Guitars, a duet with John Miller.