Wondering where to start? Follow this map for a special tour and a wide-range look at 10 of the museum’s Must See objects from our permanent collection and long-term loans. 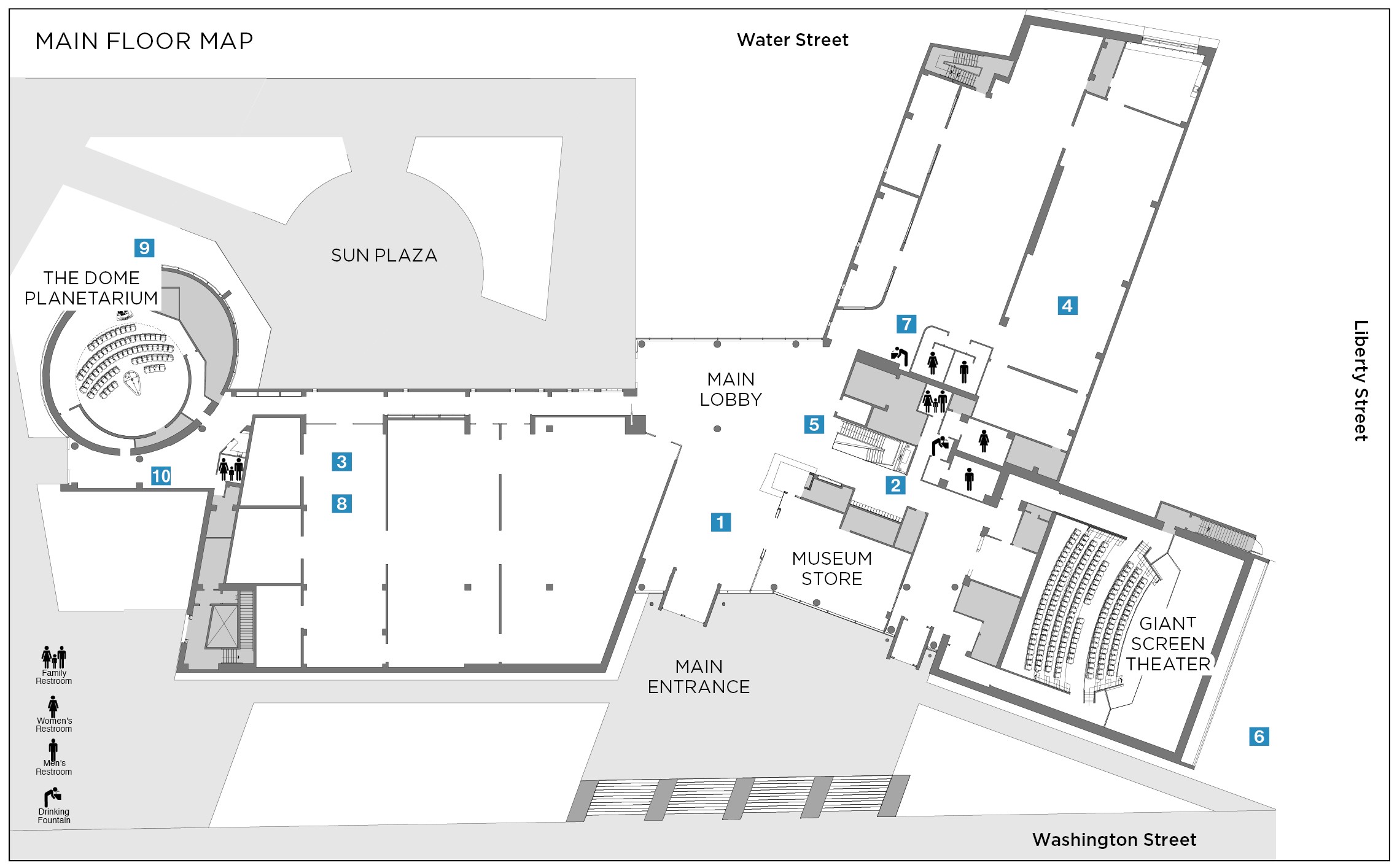 Try the Interactive Highlights Tour [perfect for families and those looking for an interactive museum challenge!] - click here. 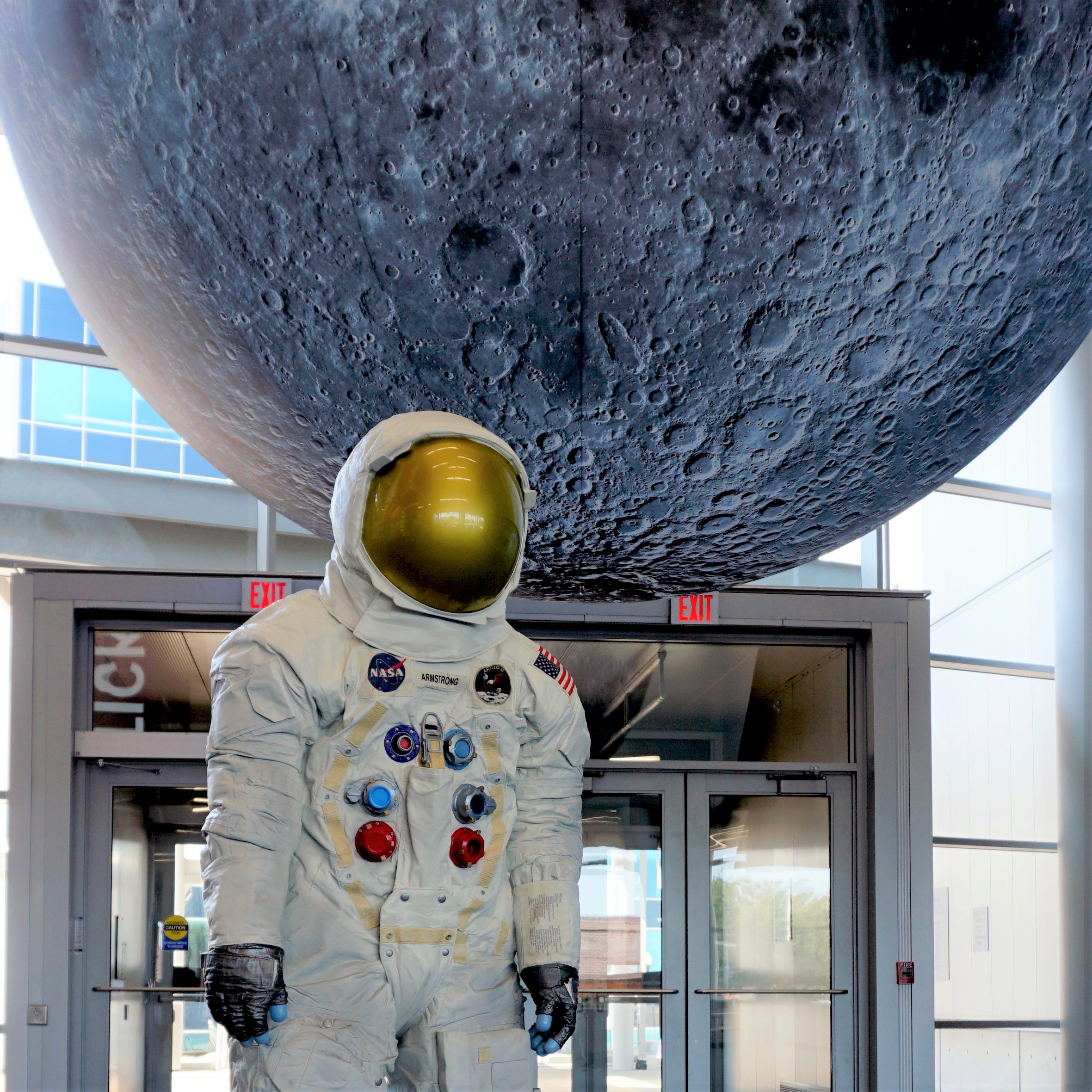 Smithsonian 3D Printed Replica Neil Armstrong’s Space SuitOn July 20, 1969, Neil Armstrong took humanity’s first steps on the Moon, wearing a complicated and high-tech pressure suit. That suit was recently conserved by the Smithsonian Institution, allowing for a highly detailed 3D scan to be made, from which this 3D printed replica was created. Notice the fine details – can you read the items on his checklist?
MOON by Luke Jerram
Jerram used high resolution images from the Lunar Reconnaissance Orbiter spacecraft to create this highly detailed and realistic artwork of our Moon. Can you recognize the side that faces Earth, and notice how different the far side looks? 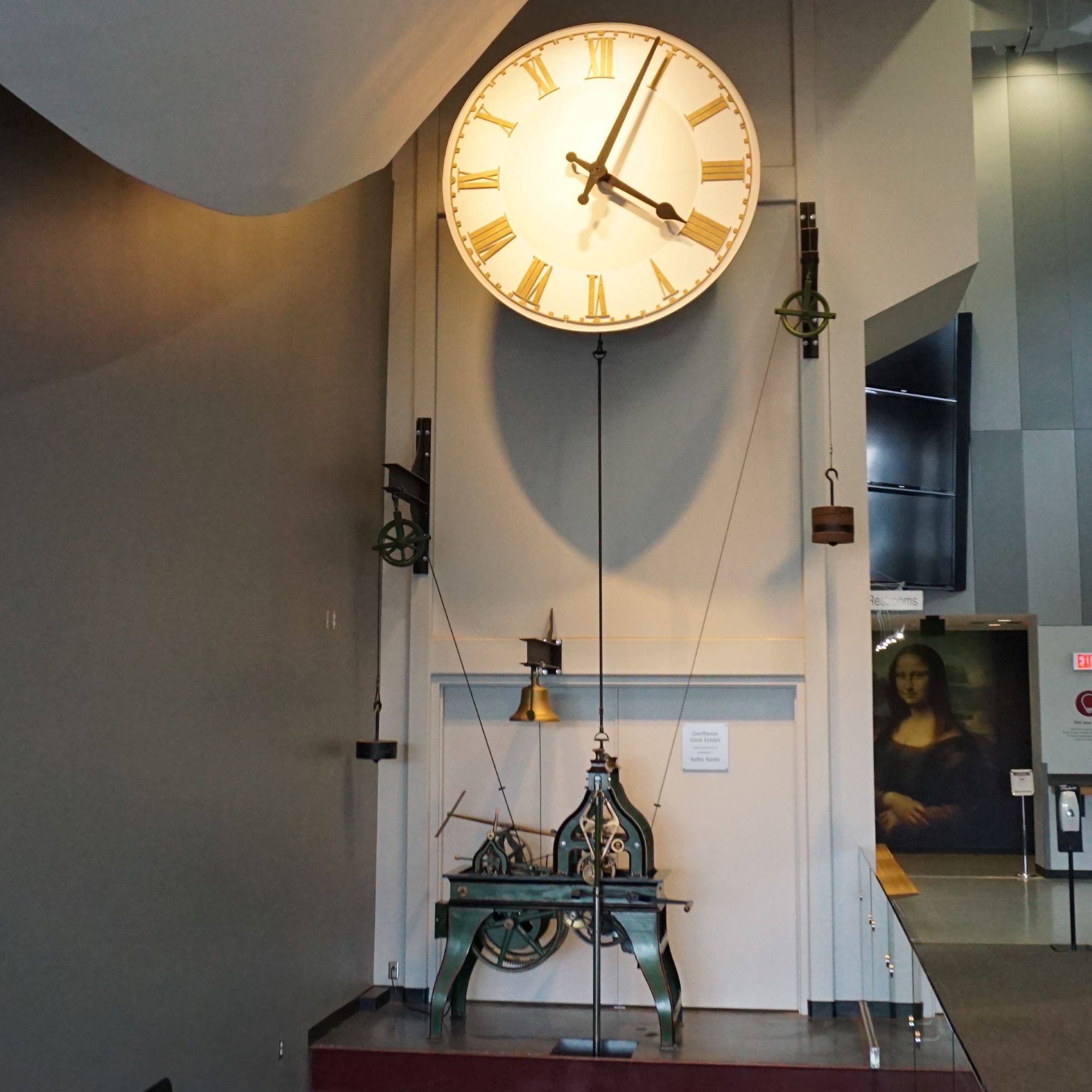 This clock face is one of the last remaining pieces of the second Peoria Courthouse, demolished in 1964. Both the demolished one and today’s present courthouse were built on the grounds of Peoria’s first wooden courthouse, where on October 16, 1854, Abraham Lincoln gave one of the most important speeches of the 19th century. He delivered a pivotal antislavery speech to a crowd, speaking for nearly 3 hours. A bronze sculpture titled Lincoln Draws the Line, by John McClarey, stands on corner of Main St and Jefferson St. 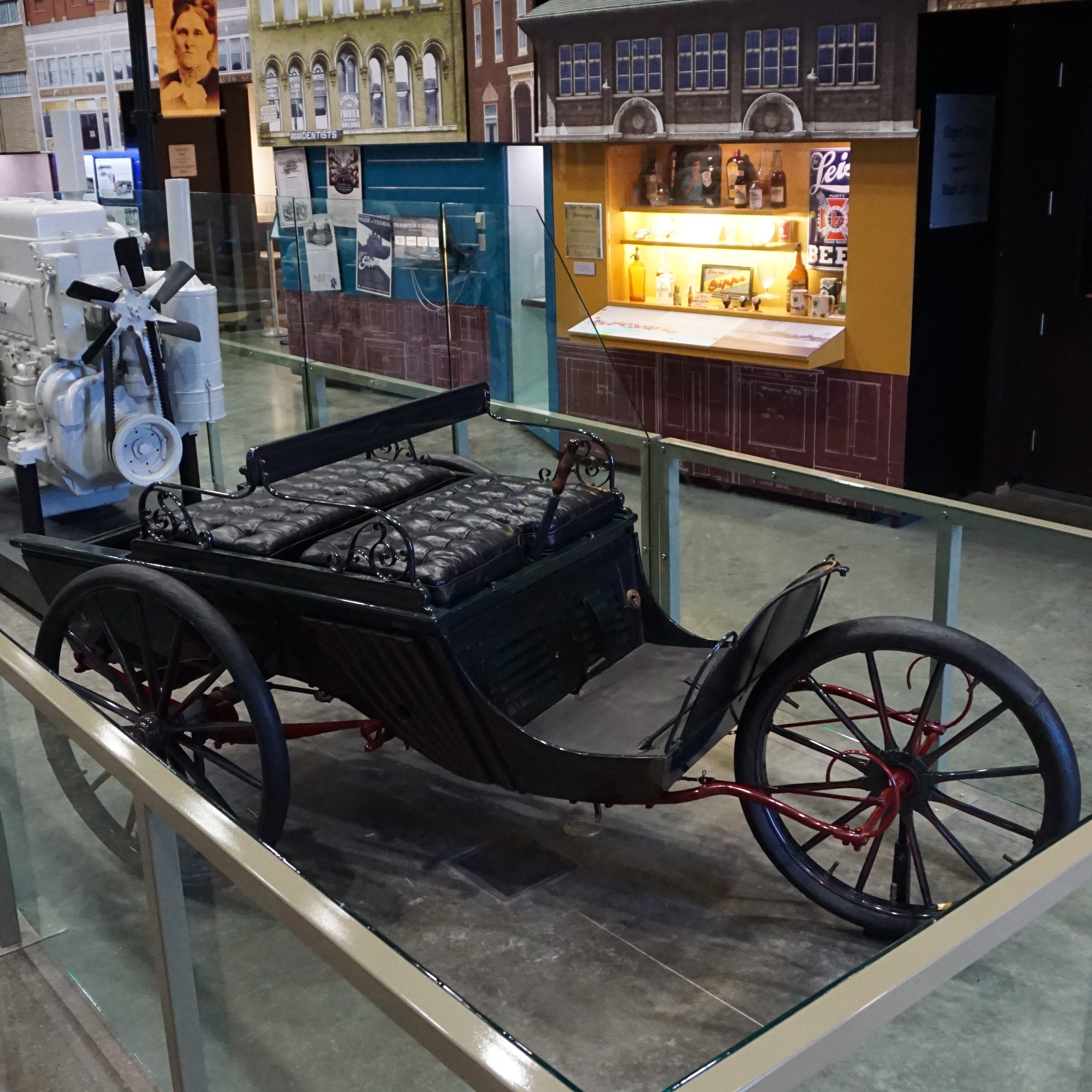 During 1899, this vehicle was one of three prototypes produced for future sale in Peoria, Illinois. Central Illinois brothers Charles and Frank Duryea founded the Duryea Motor Wagon Company in Massachusetts in 1896, where they produced 13 gasoline-powered automobiles. Their Springfield, Massachusetts company was the first to manufacture and sell gasoline-powered vehicles in the United States, an accomplishment regarded as the beginning of the American automobile industry. 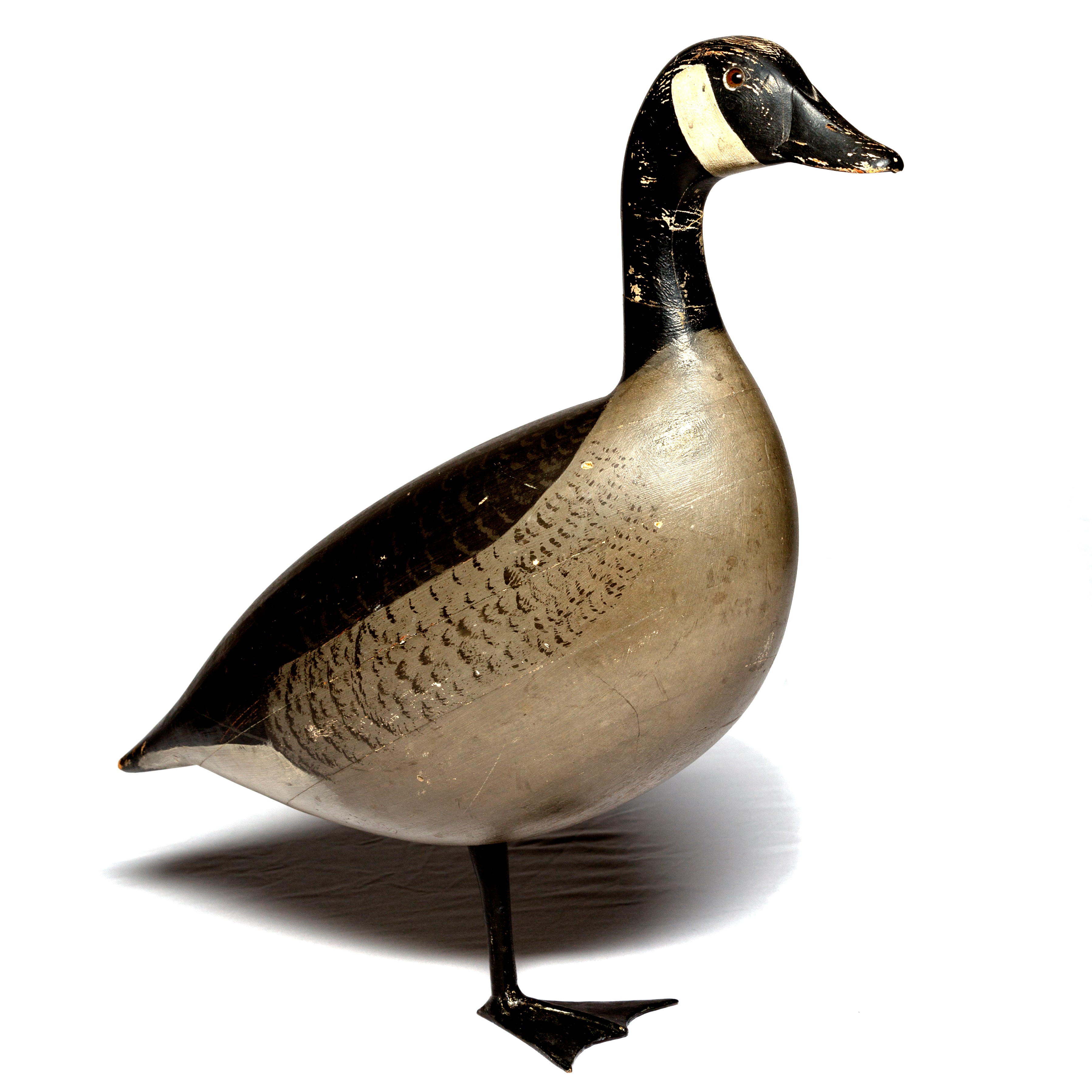 Standing on a single cast iron foot, this goose is one of the most iconic decoys ever produced in the Illinois River Valley. This extraordinary piece of American folk art was created right here in Peoria and is a testament to Illinois’s rich waterfowl history. 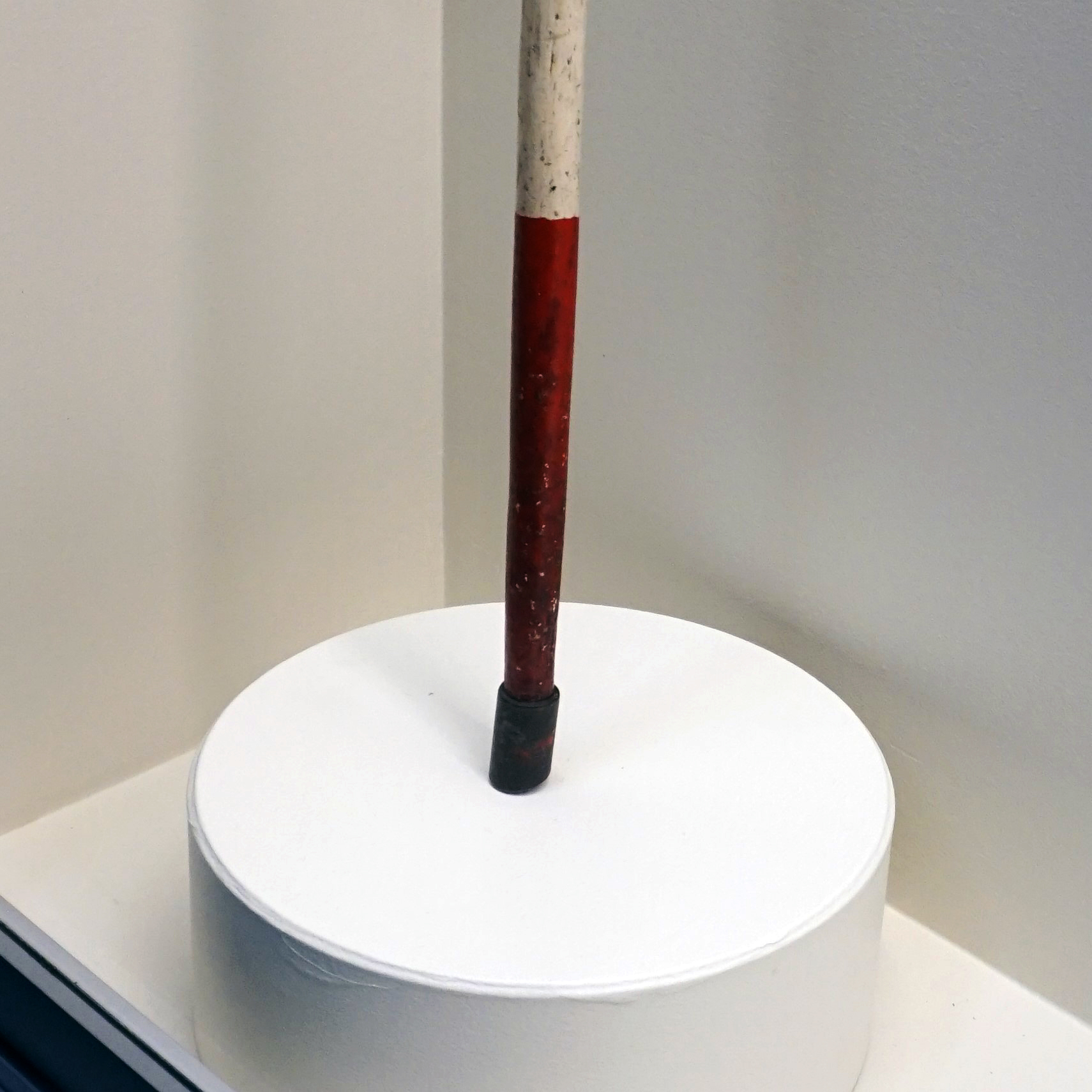 5 | The First White Cane of Peoria

In 1931, George Bonham designed the first white cane and white cane with red tip to create a visible symbol to drivers. Peoria, Illinois became the first American city to establish an ordinance giving blind and visually impaired pedestrians special right of way with possession of a white cane in 1932. The ordinance was soon observed by the entirety of the United States. In 1964, President Lyndon B. Johnson proclaimed October 15th of each year White Cane Safety Day. LOCATED ON THE LOWER LEVEL 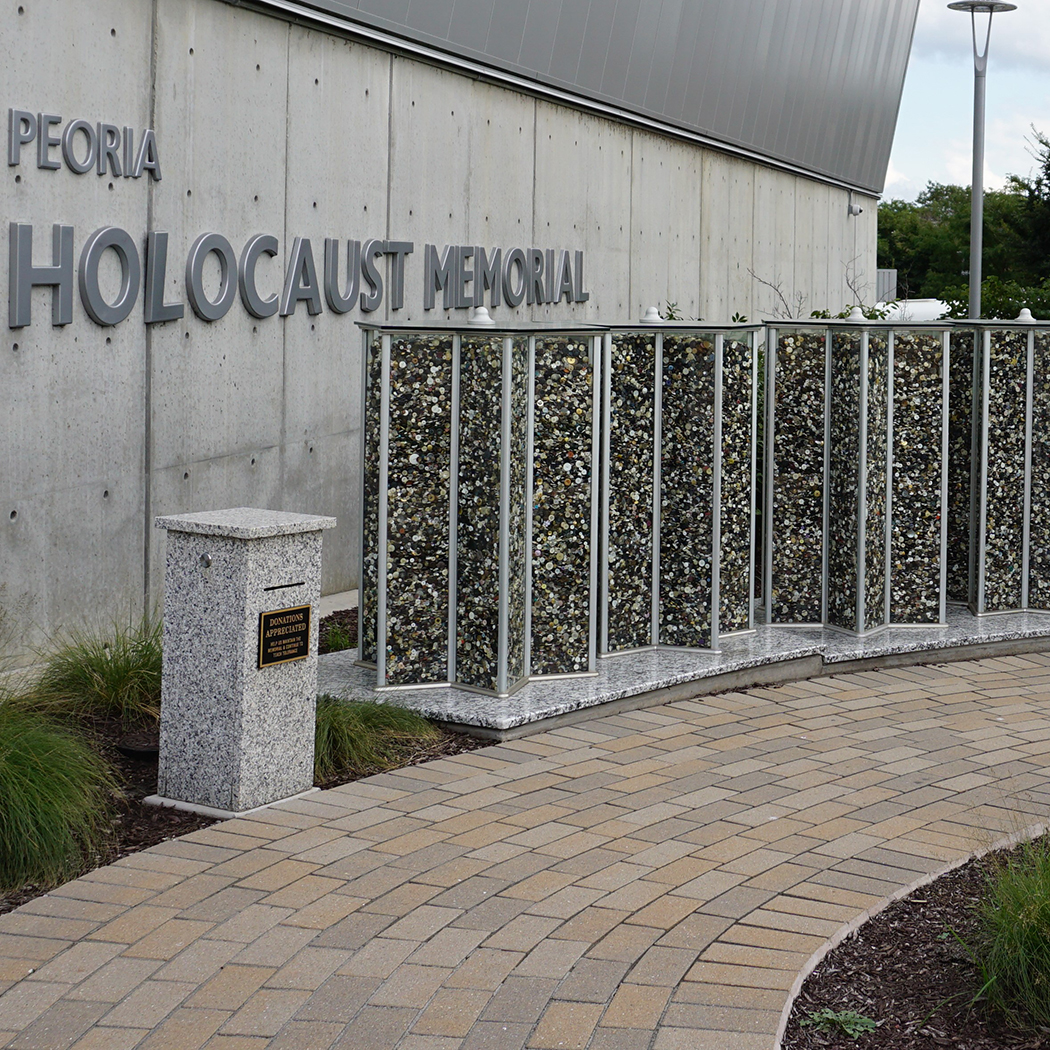 Buttons are symbolic of “Joining Our Past to Our Future,” each button is a life. One of the most important missions of the Peoria Holocaust Memorial is to educate visitors, young and old alike, so that the lessons of the past aren’t forgotten and the mistakes of the past are not repeated. LOCATED OUTSIDE 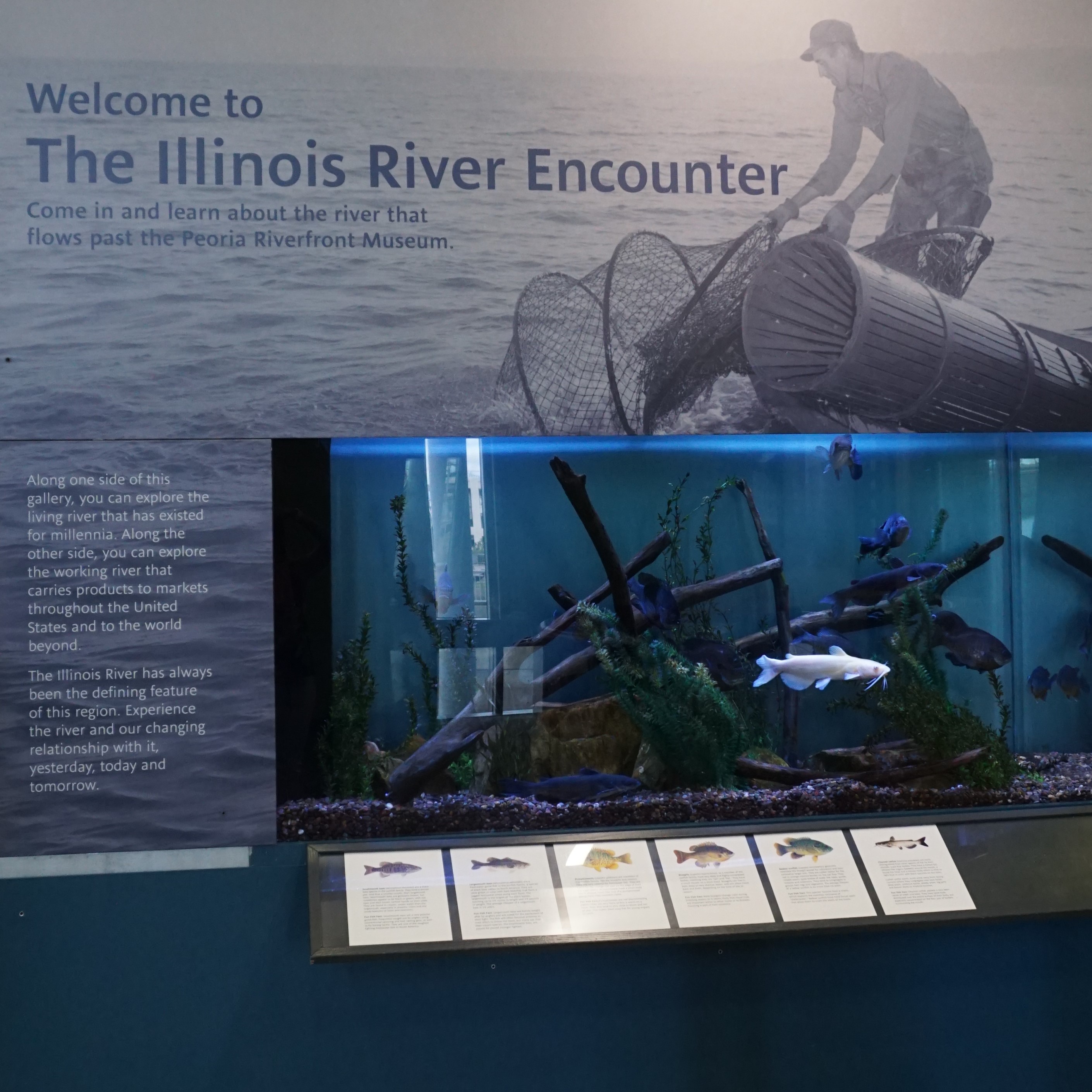 A family favorite – Learn about a variety of native fish found in the Illinois River in the museum’s fish tank! From bluegill to bass, try matching the pictures to the fish in the tank! Can you spot our albino catfish? What differences and similarities do you see? 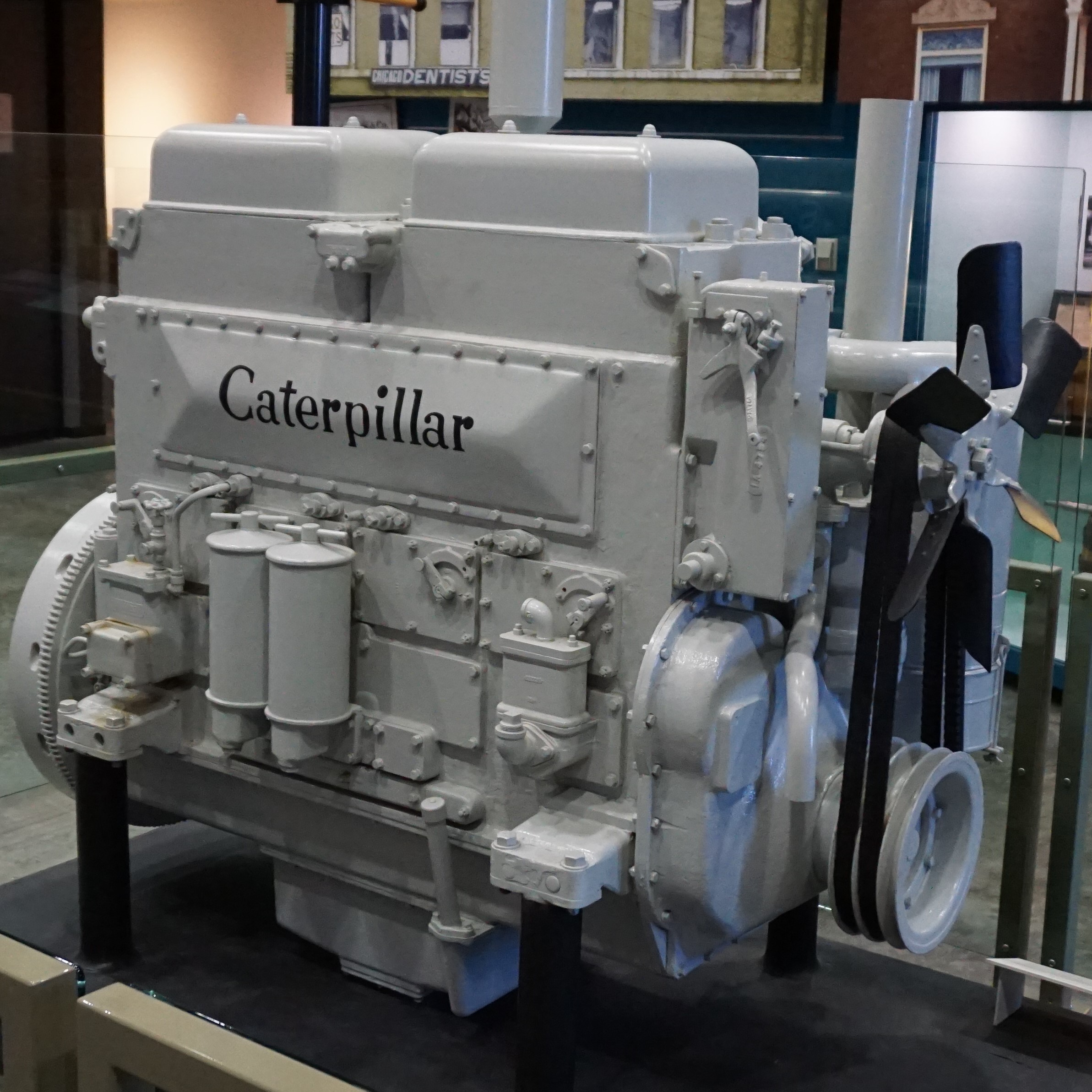 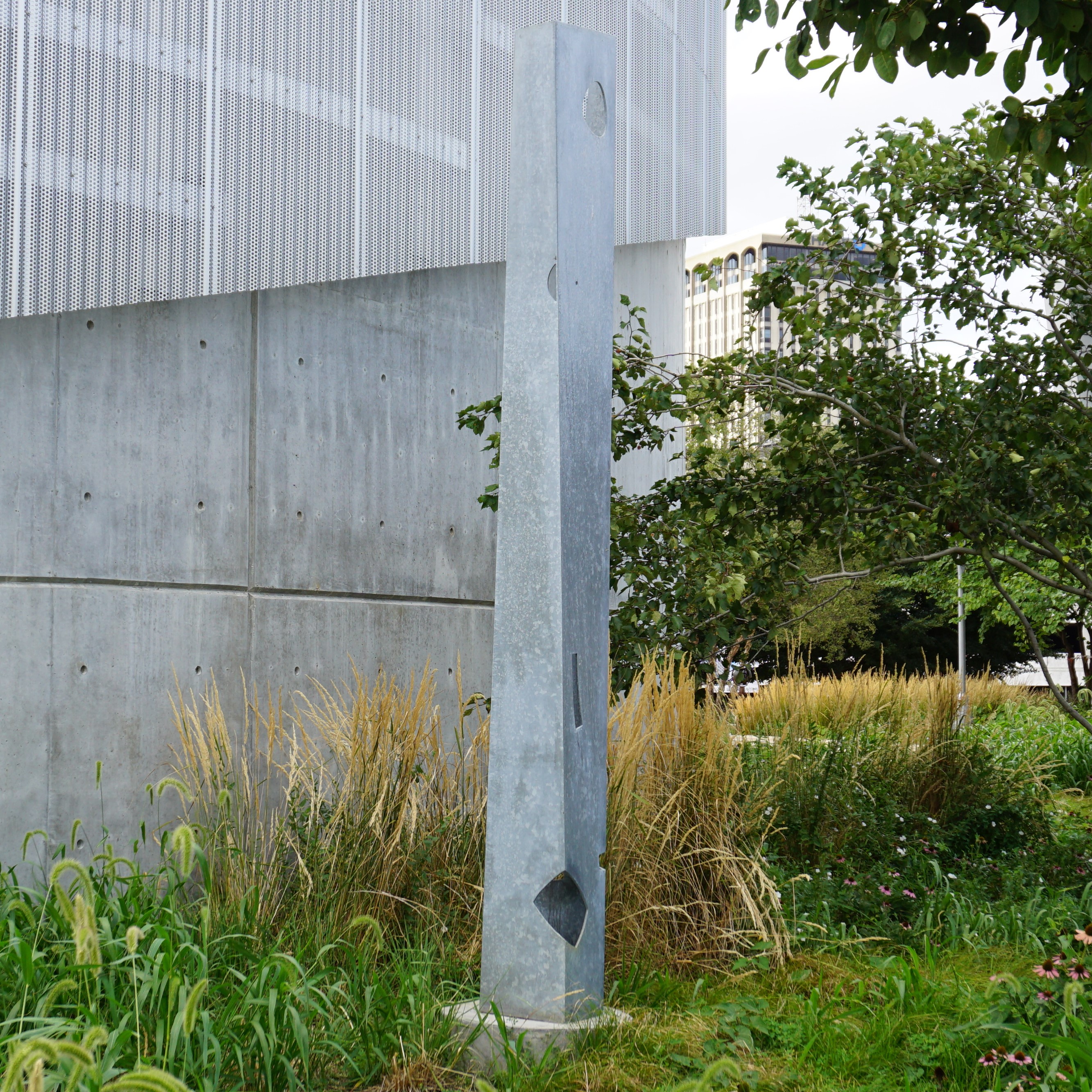 A pivotal figure in modern art, Noguchi’s pioneering work as an abstract sculptor and designer propelled mid-century sculpture at one of America’s most innovative times. His experimentation in media brought about a coalescence of Eastern and Western thought as organic materials like wood, water, and stone may be harmoniously integrated with glass, metal, and plastic. Rather than merely being “placed” in an outdoor environment, Pylon (Tall One) effectively integrates its own hard-edged geometry with the organic vegetation which surrounds it. LOCATED OUTSIDE 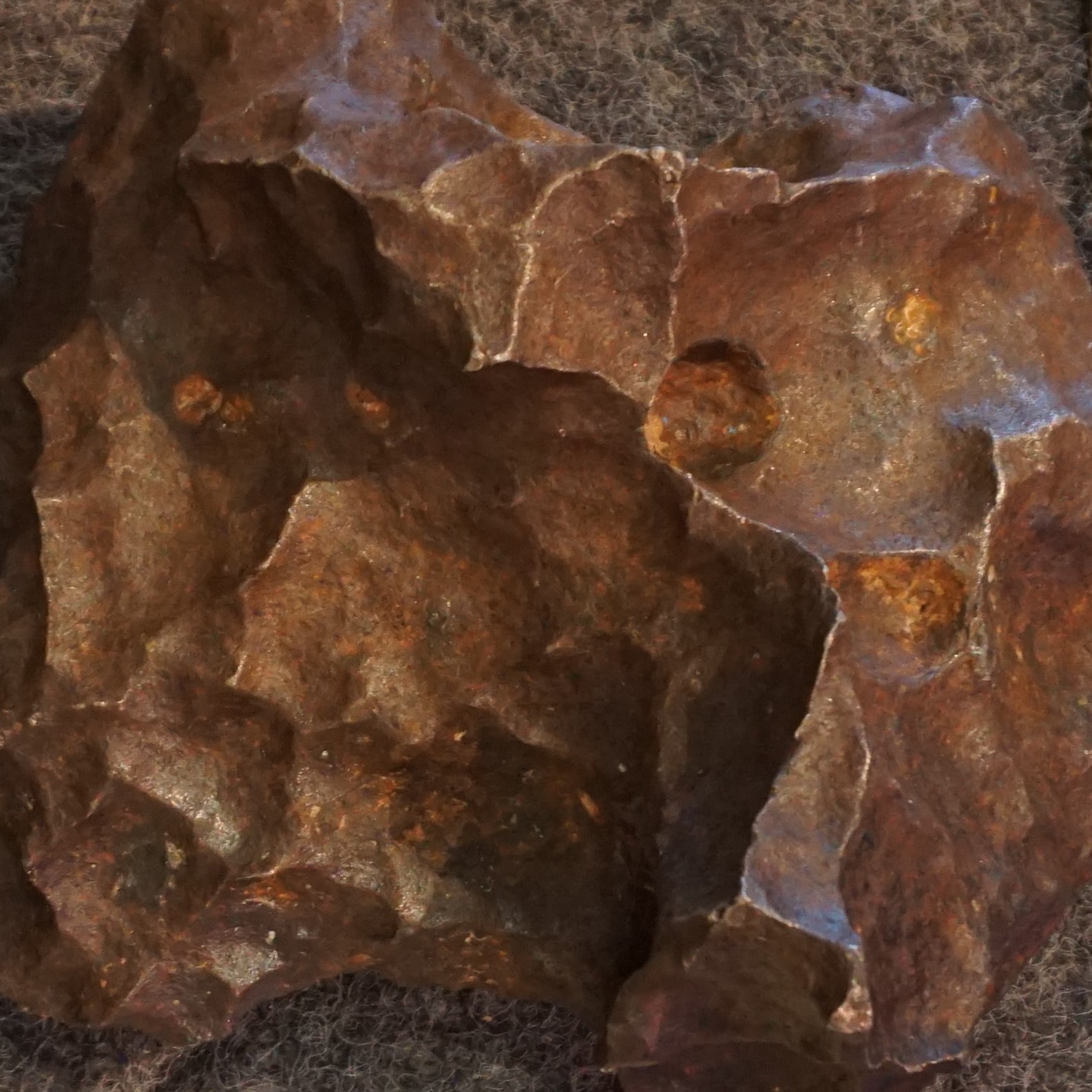 You are looking at a space rock! This is a slice of the massive Canyon Diablo Meteorite, which impacted Earth about 50,000 years ago, creating a 1,200-mile diameter crater in modern day Arizona. The impactor was likely 160 feet across. Pieces like this one are in museum collections around the world.