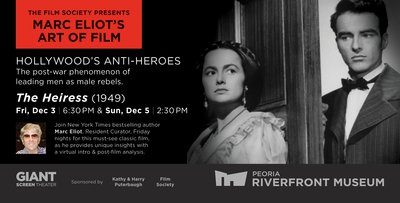 William Wyler’s 1949 The Heiress introduced America to the post-war anti-hero, expressed in Hollywood’s young, sullen, often enraged “new” leading men, led by Marlon Brando, James Dean, and, in this film, the wondrous Montgomery Clift. Watch as he struggles to connive his way into wealth and stature as he pursues Olivia de Havilland, over the objections of her father, played by the great Ralph Richardson. One of the iconic films of the 40s, The Heiress was nominated for eight Academy Awards, and de Havilland won for Best Actress. In 1996, The Heiress was selected for preservation in the United States

National Film Registry by the Library of Congress as being "culturally, historically, or aesthetically significant.” Rarely seen on the big screen, don't miss it!